One word used to describe a range of wavelengths within the electromagnetic spectrum. Similar to Spectrum.

When referring to a Quality Control (QC) batch it is important to use the internal lingo of simply a "QC". This is sometimes used as a slang reference to a generic grouping of bulbs such as those shipped on a particular order, received in from a third party or even a grouping of bulbs in an installation. This is an ambiguous use of this word and should not be used to avoid confusion.

Often referred to as a "push and twist" type of base. Bayonet bases are of either single or double contact design. All bayonet sockets are spring loaded to keep pressure against the base so that once it is twisted into place the locking notch is secured into its slot to prevent the bulb from falling out. The official names for bayonet bases always begin with the letter B or BA then a number that represents the millimeters in diameter and finally a lower case s or d for single contact or double contact respectively. A non-exhaustive list of bayonet bases:
Miniature
BA9s
BA15s
BA15d
Standard
B22d
Low Pressure Sodium
BY22d
Images: single contact bayonet base bulb with its locking notch highlighted and single contact bayonet socket (top), BY22d base of a low pressure sodium bulb with its locking notch highlighted (bottom). 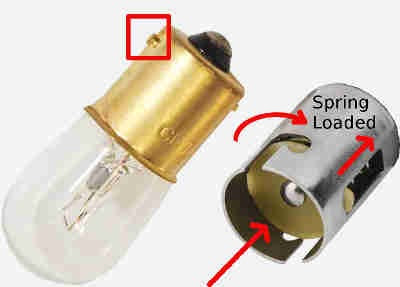 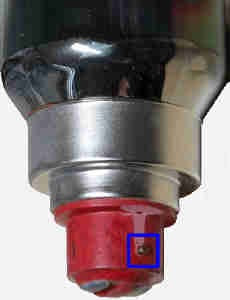 A theoretical object that among other things would be perfectly black (which means that it would perfectly absorb all light) and that would not melt. Some materials such as tungsten (the metal filaments in bulbs are made from) and graphite are fair approximations of a blackbody.

Abbreviated as "BLB". A fluorescent bulb that is made with a dark purple glass called "Wood's glass". The dark purple color of the glass is not a paint or coating but is due to the actual composition of the glass.

The peak wavelength of BLB bulbs is most commonly 365 nm. This special glass filters out certain wavelengths in order to produce a cool purple glow. This bulb is commonly referred to by customers as simply a "blacklight" but a true blacklight is a different bulb so it is important to clarify which bulb is being referred to.

Abbreviated as "BL". The peak wavelength of BLB bulbs is most commonly 350 nm. BL bulbs are commonly used in "bug zappers" and also in coating curing applications.

A generic term to describe that a bulb is now inoperative. Most commonly a 'blown' bulb will have some sort of residue on the inside of the glass.

"A configuration with leads or a wire-trap on the bottom or base of the ballast. This type of configuration is usually used when the ballast is mounted onto a junction box plate." - Advance Ballast Glossary

The inside surface of a light bulb's envelope.

For LED fluorescent retrofit bulbs this means that the ballast must be removed from the circuit before installing the bulb. Afterwards the bulb will be powered by the line voltage that was originally supplying the ballast.