A word used often in the lighting industry in place of "light bulb". In modern mainstream English however it is technically incorrect. Thus, lighting professionals dealing with the public are encouraged to use the word they will understand, "bulb".

A soft metal with a low melting temperature commonly used in solder to make electrical connections on light bulbs and other electrical devices such as circuit boards.

The wire that runs from the end of an electrode or filament to the associated electrical contact. Most commonly these wires are made of pure molybdenum wire.

Leadership in Energy and Environmental Design

A bulb using light emitting diodes as its light source. LED Bulbs have been designed in a sufficiently wide selection now to fill almost any need and to retrofit almost any traditional bulb. Their efficacy exceeds that of any other light source in wide use today. As their cost had dropped the advantage of their use has increased significantly. LEDs also have superior efficacy with lumen per watt values of 130 or even higher. For additional information see Light Emitting Diode.

Abbreviated LHT. Base designation: EL26. A threaded base with the same dimensions as a standard E26 base but with threads that spin in the opposite direction. Was Intended to deter theft and also, in prisons, to prevent misuse.
Left Hand Thread
Right Hand Thread 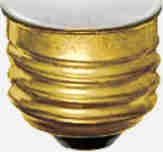 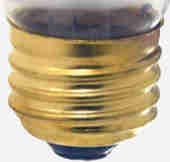 The hardware the spans the distance between the ends of two legs of a fluorescent u-bend bulb.

Visible radiant energy. Light is transmitted in the form of photons in varying amounts of primary colors of the visible spectrum are Red, Green and Blue which are collectively referred to as the RGB Color Model.

Abbreviated as "LCL". The distance from the appropriate reference point on the base of a bulb to the center of the bulbs light source such as a filament or arc tube. The LCL of North American bulbs is measured in inches while every other country uses millimeters.

Abbreviated as "LED". A semiconductor light source that has over time evolved into a highly efficient and compact light source. While most light sources emit light in a spherical pattern and must then make use of inefficient optics to direct the light LEDs have the distinct advantage of naturally generating their light in a highly focused directional pattern.

In general conversation a light source is often considered something that either emits light or that appears to emit light. In this context, examples of light sources would be the sun, the moon, a light bulb or even a mirror. Of those examples however, only the sun and a light bulb emit light; the moon and a mirror both appear to emit light but actually only reflect light. In the lighting industry the phrase light source refers to either the sun or to a device that emits artificial light. Note that artificial light sources may in addition to a component that emits light such as a Light Emitting Diode (LED) or incandescent filament include various optics such as a reflector to direct the light being emitted.

"A brief stoppage in the flow of current supplied by the electrical distribution system." - Advance Ballast Glossary

A generic name applied to bulbs that have a longer life than what is normal for a particular product type.

A bulb with a longer neck than normal. This refers specifically to PAR30 shaped bulbs which come in both short neck (/SN) and long neck (/LN) versions.
Long Neck
Short Neck 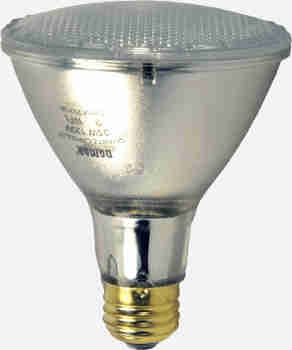 A special discharge bulb design that permits the use of less mercury but without any measurable loss of life and/or performance. See Fluorescent Bulb > Mercury Content > Low Mercury Bulbs.

Commonly said as "low temp". Commonly used to reference fluorescent bulbs and ballasts, specifically those designed for use at refrigeration temperatures, around 40 degrees, or lower.

Any voltage less than 120 volts. Low voltage may be either AC or DC.

Abbreviated as "lm". An international standard unit of measurement (SI) for Lumnous Flux. While there is more to it than this, it essentially is the amount of light being emitted by a light source.

The gradual loss of effective light output occurring over the life of a light source. Most light sources including, but not limited to Incandescent, HID, Fluorescent and LED light sources are subject to this factor. Additional factors that are cumulative and time and environment dependent such as dirty reflectors, bulb walls, lenses and optics can also greatly affect light output.

A value between zero and one that is calculated by dividing the lumens emitted by a light fixture by the lumens of the bulb being used within.

A rarely used measurement that requires a mathematical formula to make real use of. For the satisfaction of those that may feel shortchanged if no definition is included herein here is a more detailed definition: "Formerly, a measure of photometric brightness. Luminance has a rather complicated mathematical definition involving the intensity and direction of light. It should be expressed in candelas per square inch or candelas per square meter although an older unit, the 'footlambert', is still sometimes used. Luminance is a measurable quantity whereas brightness is a subjective sensation." - GE Lighting Glossary.

Abbreviated as "lx". The international standard unit of illuminance. One lux is equal to one lumen per square meter.