Abbreviated as "FCC".
"FCC (Federal Communications Commission) Regulations - Legally enforceable U.S. government standards for EMI and RFI that must be met by highly frequency electronic devices used in this country for Class A (industrial) or Class B (residential) applications." - Advance Ballast Glossary 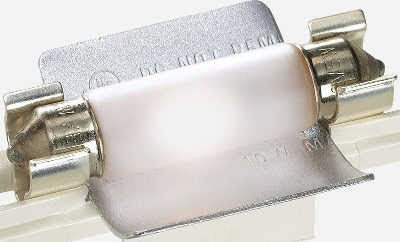 Not to be confused with beam angle. An angular measurement stated in degrees (°) that is measured in two opposite directions from the center of the beam outwards to the point that the intensity of the beam reaches 10% of the beam's maximum intensity. These two angles are then added together to equal the total field angle. The intensity of the light emitted between the beam angle is sufficiently low that it is considered excess wasted light. This measurement is different from beam spread which is similar but is measured to 50% of the beam's maximum intensity.

The process of tungsten leaving the filament as a result of evaporation that is caused by the extremely high temperature that it reaches.

Voltage applied to fluorescent electrodes to preheat the filaments for operation.

A common misspelling of fluorescent.

To fluoresce is to absorb a shorter wavelength of the electromagnetic spectrum such as ultraviolet and then to emit a longer wavelength such as light (sometimes redundantly referred to as "visible light").

A small piece of auxiliary gear used only with preheat start fluorescent bulbs and the appropriate corresponding ballasts. Provides a high-voltage discharge to preheat the bulb's filaments and thus begin the starting process. Starters are designed to continue the starting process until the bulb is lit. Once a preheat bulb reaches its end of life the starter may no longer be able to start the bulb and thus will continue attempting again and again. These continuous attempts to start the bulb can cause overheating and/or failure of lighting system components and can even present a fire hazard. The proper course of action is to replace the bulb but in the case that a bulb is installed in an application where the end of life symptoms (continuous flickering and starting) may not be seen a type of fluorescent starter with a reset button is available. This type of starter will "trip" or open the circuit if it is unable to start the bulb. When it does so the button on the starter will pop out and will not attempt to start again until the button is pressed in again. 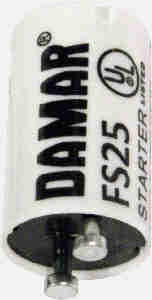 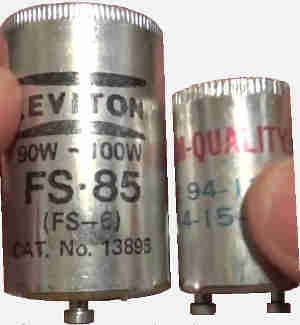 Abbreviated as "fc". Technically printed as "foot-candle" but in practice it will be most often seen as simply "footcandle". Used to measure the intensity of the light falling upon a surface. This is a unit of measurement of illuminance. One footcandle equals one lumen per square foot.

A rarely used measurement of luminance. In more recent time the unit of candelas per square meter is used.

A bulb 'dreamed up' to fill a need or application. Most commonly a non-existent bulb that combines the features of one or more bulbs.

"Assembly of electronic components designed to accomplish a given task in the electronic ballast, such as EMI filtering, or power factor control." - Advance Ballast Glossary