The gas that fills the envelope of a bulb. Incandescent bulbs over 40 watts are almost always filled with an inert gas, which is a gas that won't react with other materials, such as argon but, in higher performance applications, krypton or xenon. Bulbs under 40 watts most commonly have a vacuum fill but 40 watt bulbs may or may not have a gas fill. The purpose of using a gas fill is to increase the bulb's lifetime and efficiency. The weight of the gas(es) reduces tungsten evaporation and conserves heat which in turn increases efficiency. Heavier gases have greater effect and increasing fill pressure further increases said effects. Krypton and xenon are quite expensive compared to argon and thus, to decrease the amount required and to increase resilience, the gas filled envelope is much smaller.
Image:  argon fill 1500w PS52 - 6.5" MOD (left)
vacuum fill 25w A19 - 2" MOD (middle)
xenon filled 60 watt T4 - 0.5" MOD (right) 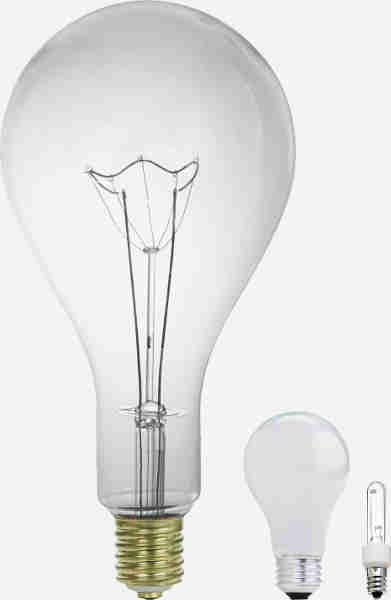 A general service lighting application is one that serves the purpose of providing light for general purposes such as a strip, troffer and wall pack fixture.

The current design, technology, performance level and/or cost basis of a particular product cycle. Example: "Each new generation of LED product tends to be cheaper with a smaller footprint and higher performance." Most commonly generations are only numbered when referring to multiple generations from the same manufacturer.

Germicidal bulbs are designed to eliminate microbes, and/or to create ozone. They emit specific wavelengths of ultraviolet (UV) that are effective at killing bacteria by destroying its DNA. While they do emit some visible light, it serves no purpose as they are not under any circumstances used for general service lighting applications.

All germicidal bulbs have clear envelopes made of fused silica (quartz glass) envelopes. Quartz is used because, unlike the glass used in general service fluorescent bulbs, it transmits the full range of UV. The wavelengths in the mercury emission spectrum of 185nm and shorter are sufficiently powerful to create ozone (O3) from the oxygen (O2) in the surrounding air. Ozone production is desirable in water purification applications. The most common type of germicidal bulbs however are used in applications that do not require the production of ozone and thus have a special coating applied to their envelope that blocks ozone creating wavelengths.

Note: The range and intensity of UV emitted by germicidal bulbs is harmful to both skin and eyes, and should not be used in any fixture or application that is not designed specifically for germicidal bulbs.
Images: (2) GPL36 bulbs operating (top right), example germicidal warning label (below), graph of mercury vapor UV emission spectrum (bottom right) 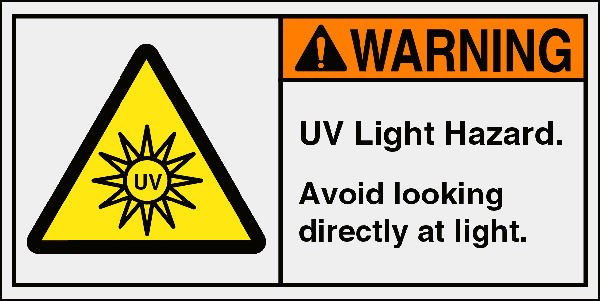 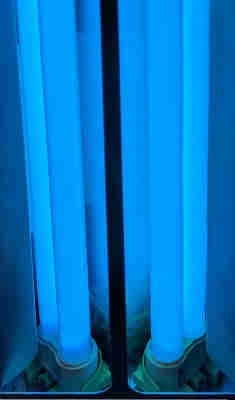 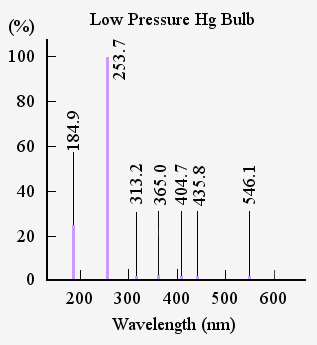 A compound placed inside a vacuum tube that "completes" the vacuum. It can be designed to target specific things like oxygen and moisture.

Equipment used to measure the beam spread of a light source. Image: Click for a demonstration video.