"'Background noise' generated by ballasts and other equipment operating in a building. Low ambient sound levels are desirable for hospitals, libraries and similar applications where high noise levels are unacceptable." - Advance Ballast Glossary

"The surrounding temperature within an environment." - GE Lighting Glossary

The current carrying capacity of a conductor such as wire.

The standard unit of measurement for electrical current.

"The "positive" terminal of a diode." - GE Lighting Glossary

An opening, usually in a recessed luminaire, through which light enters a space.

"Also called "lighting application," it refers to the particular use for a lamp (e.g., high-bay industrial application or retail lighting application.) The term can also refer in a general way to "application engineering" which deals with specific parameters and usage of light sources (e.g., how to do a lighting layout, where to place fixtures and so on)." - GE Lighting Glossary. 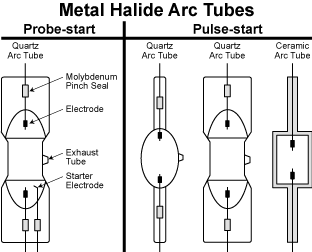 "Generation of an electrical arc between the output leads of a ballast. May deactivate conventional electronic ballasts." - Advance Ballast Glossary

A member of the noble gas family of elements which includes helium (He), neon (Ne), argon (Ar), krypton (Kr), xenon (Xe), radon (Rn), and element 118 (temporarily named ununoctium [Uuo]). The members of the noble gas family are known for their reluctance to undergo chemical reaction and are thus excellent for use in applications where oxidation is a concern such as inside of a light source.

An industry phrase that includes, but is not limited to, ignitors, starters, capacitors, transformers, drivers, ballasts, quartz restrike controllers and other starting/operating electrical components of a lighting system.