When referring to a threaded screw base it is abbreviated as "E". Most of the time this refers to a standard medium base technically called an E26 base.

The measurement of how efficiently a light source converts power (watts) into light. The efficacy of a light source is expressed in lumens per watt (LPW). See Lumens Per Watt.

A piece of conductive metal, often tungsten, used to conduct electrons or in other words permit electricity to flow through a gas fill. Electrodes are used in all discharge bulbs other than induction bulbs. They are classified as cathodes and anodes. 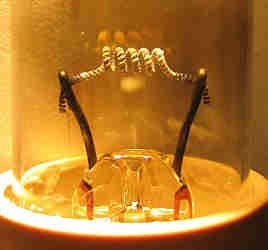 A simple type of low frequency ballast that operates using a core and coil design to start both fluorescent bulbs and high intensity discharge bulbs.

Energy such as light, radio waves, gamma rays, and X-rays emitted in the form of electromagnetic waves in which the electric and magnetic fields vary simultaneously.

The full spectrum of radiation (light) ranging from cosmic rays to broadcast bandwidths.

One of the four fundamental forces of nature. Manifestations of the electromagnetic force include electric fields, magnetic fields, and light.

A particle that carries a negative charge and serves as the primary carrier of electricity.

A name for the outer shell or "container" of a light bulb. Most commonly it is glass but can be made of other materials. The term envelope is generally used when speaking of a solid simple shaped outer shell of a bulb such as a cylindrical, spherical, egg shape or the like. So, for example it would not be accurate to refer to the outer glass of a helix shaped bulb as an envelope.