The process of inspecting surfaces and slight subsurfaces of metal for discontinuities, cracks and fractures. This process commonly makes use of the emission spectrum of blacklight blue bulbs in order to effect detection. Also known as Magnafluxing.

The European version of the American phrase "Line Voltage". It refers to the common "standard" voltage provided at the receptacle.

Abbreviated as "MOD". This is the maximum outer diameter of a bulb's shape. The MOD of North American bulbs is measured in eighths of an inch whereas the rest of the world measures in millimeters.

Tip: A quick way to convert back and forth between MODs measured in millimeters and eighths of an inch is to use 0.315. 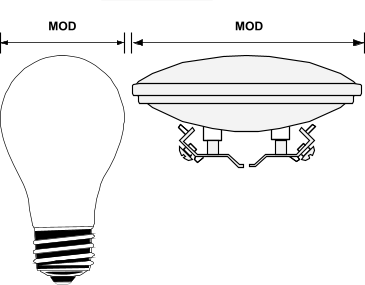 Abbreviated as "MOL". This is the maximum length of a bulb from absolute end to the absolute opposite end. The MOL of North American bulbs is measured in inches while every other country uses millimeters. 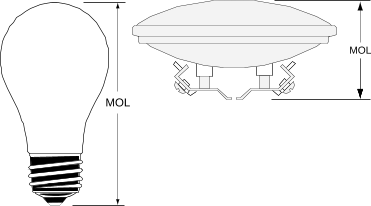 Also known as E26 base, the most common base size in North America.

The trademarked name for the Damar line of metal halide bulbs.

Abbreviated as mF. One millionth of one farad. See Farad. 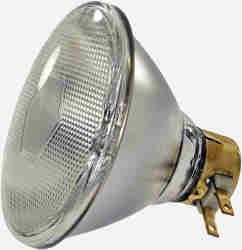 An industry name for a wide variety of very small bulbs for use in specialty applications such as indicator bulbs, dashboard bulbs, tail lights and the like. Miniature bulbs come in a wide variety of types including, but not limited to, incandescent, halogen and LED

A name for the line of T2 shaped (tubular, 2/8" diameter) fluorescent bulbs. Their industry description begins with "FM" for fluorescent miniature. An example is shown below:
20374A D FM11T2/835 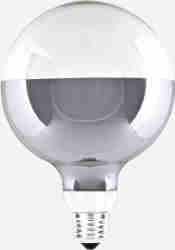