A light source which relies upon a filament made of tungsten wire as its method of generating both heat and light. Electrical current is conducted through the tungsten filament which is heated by this process. The emission of light which results from the filament's high temperature is called "incandescence".

No longer functioning as intended, specifically to the point that it is either no longer functioning or must be removed from operation. This means that a product could still be in active service yet could be deemed inoperative because, for example it is no longer safe to continue to operate it.

Institute of Electrical and Electronics Engineers

A ballast that is built into (integrated into) a light source such as a LED or compact fluorescent bulb.

"Circuit of transistors, resistors and capacitors constructed on a single semi-conductor chip, all interconnected to perform a given function." - Advance Ballast Glossary

"A device that disconnects [a] ballast to prevent damage in the power distribution system." - Advance Ballast Glossary

The English name for Commission internationale de l'éclairage. Pursuant to the French name it is abbreviated as CIE. It was established in and replaced the Commission Internationale de Photométrie in 1913. It is based in Vienna, Austria. It is accepted as the international authority on light, illumination and color.

IP stands for Iron Pipe. A method of mounting a socket which uses a threaded female opening on the bottom of a socket that threads onto a piece of threaded metal tubing. Lighting IP fittings are almost always 1/8". This is in no way related to Ingress Protection. 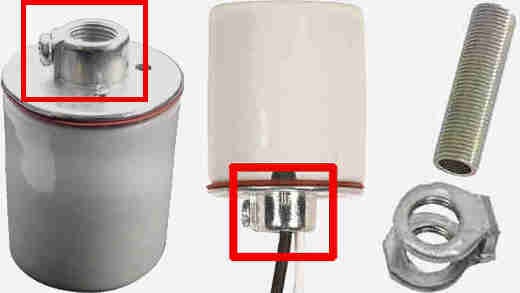